The penny is dropping only slowly. It’s crystal clear that the climate is changing and with it the weather we can expect.

But, despite this, adaptation is slow. Greenpeace report here that building in UK flood plains continues apace, even being proposed in areas currently well under water.

Another BBC report today showing the extent of the damage.

It will be many, many months, even a year or more,  before things are back to normal for many people.

Apart from the obvious physical damage to property and infrastructure, being flooded is known to affect not only people’s mental health but their physical health as well.

“Bramhall, in Stockport, was also badly hit by flooding, with eleven people and four dogs being rescued, GMFRS said.

Jackie Carter, who lives there, said: “I was working from home yesterday and saw the water starting to come over the patio at the back of the house.

“Within two hours we were being evacuated. It’s the second time in three years – the first time we were out of our house for 11 months.

“You are not allowed to live in a house that has been contaminated through ‘black water’ – it seeps in everywhere… the floorboards, everything. I saved as much as I could, photographs and stuff like that, but there’s only a certain amount you can do.” “

The BBC reports widespread damage and disruption from flash flooding in the Yorkshire Dales. Another unusual weather event and evidence of the massively damaging force of flood waters.

“Steve Clough, of the mountain rescue team, said: “The conditions were so bad that in the end only about 10 or 12 team members could make it there.

“The roads were a raging torrent and there were sheds and household oil tanks floating down them.”

Mr Clough said his team spent more than eight hours searching properties in the area, rescuing about 10 people, but he added that North Yorkshire Fire and Rescue Service helped many more and estimated “100 or more” homes had been affected.

“Some homes had a metre of water in them – it was horrific,” he said.”

More, including videos, in the article:

While Oxford’s flooding is not typically flash flooding, the increasing occurrence of extreme weather events, and the damaging effects, disruption, human distress and cost of flooding is relevant everywhere.

“Rush hour commuters faced delays as heavy rain continued to cause disruption to the North West’s road and rail network.

Trains were cancelled between Manchester and towns including Wigan and Stalybridge. The A555 Manchester Airport Relief Road remained closed.

The equivalent of half a month’s rain fell on the region in the space of 24 hours, said the Met Office.“

We’ve had a dry summer, river flows are low and flooding may seem a long way off. But it’s always a threat as this article on the BBC website today, about severe flooding in Wales, reminds one:

Whether this event is due in some part to climate change may be impossible to know for sure, but there is no doubt that extreme weather events are becoming more frequent across the world. Now is the time to prepare Oxford for that future.

The planning application for the Oxford Flood Alleviation Scheme is being scrutinised; if approved Oxford’s flood risk will be reduced. Without it Oxford will remain largely undefended and future generations will rightly ask why something wasn’t done while the opportunity was there.

Nearly 200 countries, developing and developed, and including oil and gas producers, reached agreement at the COP21 conference in Paris to address climate change. This looks like the beginning of the end for fossil fuels.

The deal requires that countries should stem greenhouse gas emissions, with the goal of peaking emissions as soon as possible and continuing the reductions as the century progresses. The aim is to keep global temperatures from rising more than 2°C by 2100, ideally keeping the rise below 1.5°C.

The deal will encourage trillions of dollars to be spent adapting to the effects of climate change – including of course flooding – and developing renewable energy. Developed countries are to send at least $100 billion each year to developing countries beginning in 2020.

The agreement gives countries leeway in determining how to cut their emissions but they must report how they are doing. Progress will be reviewed every five years.

Some elements, like reporting requirements, are legally binding, others, such as the setting of emissions targets for individual countries, are non-binding.

This is potentially a game-changing agreement and has been widely welcomed. Hopefully the catastrophic possibility of irreversible and escalating change can be averted. Nevertheless, climate change is here with us and we can expect to see its effects on weather patterns continuing for the foreseeable future, with increased flooding a prominent result.

Let us hope that the implementation of the Paris agreement is as good as promised. 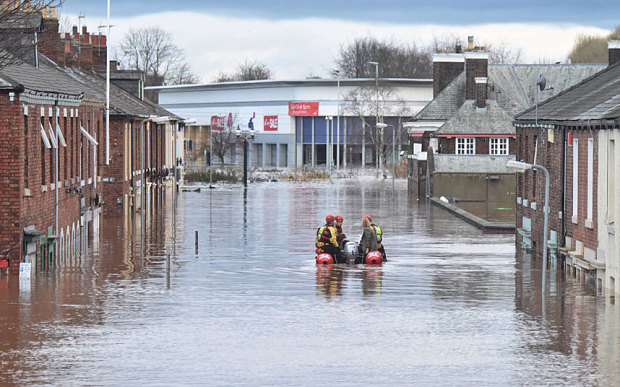 There has been widespread and severe flooding in Lancashire and Cumbria due to unprecedentedly heavy rainfall in a short period from Storm Desmond. One feels for the people affected, many not for the first time.

‘The 405mm of rain that fell in Thirlmere in the 38 hours to 8am on Sunday marked a record amount of rain ever to fall in a 48-hour period while the 341.4mm recorded at Honister Pass on Saturday broke the highest rainfall record for any 24-hour period.’

‘Dame Julia Slingo, the Met Office’s chief scientist, said the “extraordinary” conditions were likely the result of climate change. Her comments were echoed by Liz Truss, the Environment Secretary, who told MPs: “Climate change is factored into all the modelling work the Environment Agency does but clearly in the light of this extreme weather we are going to have a look at that modelling and make sure it’s fit for purpose.” ‘http://www.telegraph.co.uk/news/weather/12038356/Floods-caught-ministers-by-surprise.html

‘Prof Hall [Professor Jim Hall, director of the Environmental Change Institute at the University of Oxford] said there was always a trade off between costs and risks. Nevertheless, he added that the latest floods “should be a trigger for a revaluation of protection standards”.’ http://www.ft.com/cms/s/0/57b91e9c-9cf1-11e5-8ce1-f6219b685d74.html#axzz3tiucxtde

There is more on the relation between flooding and climate change here http://www.belfasttelegraph.co.uk/news/uk/heavy-rain-and-flooding-fit-with-climate-change-predictions-34268682.html

Extreme weather events associated with climate change are already more common: we need to make sure the assumptions used in the modelling of the Oxford Flood Alleviation Scheme (Oxford FAS) sufficiently take into account the effects of climate change.

There is lots of attention on climate change just now with the United Nations conference COP21* coming up next week. Whether governments will agree enough, and then do enough, to hold any increase in global warming to 2˚C remains to be seen. Limiting the average global surface temperature increase to 2°C over the pre-industrial average has generally been regarded as an adequate means of avoiding dangerous climate change – though there is some doubt about whether this is sufficiently stringent.

Whatever happens, we can expect an increasing frequency of extreme weather and we need to be investing in ways of mitigating the impact. As far as Oxford and the threat of flooding is concerned that, in our view, means the Oxford Flood Alleviation Scheme (Oxford FAS). See too a previous post on Oxford FAS and climate change .

* COP21 is the 21st Conference of the Parties, i.e. the annual meeting of all countries which want to take action for the climate. It will be held in France, from 30 November to 11 December http://www.cop21.gouv.fr/en/.