We’re supporting John Burbank (manager of the Weirs Orchard residential moorings) in his determined efforts, for safety reasons, to get clearance of obstructions above Weirs Mill Stream in the Thames navigation channel by Long Bridges, particularly the trees in the photograph, above Donnington Bridge. We’ve written more than once to the Environment Agency (EA), most recently a few days ago, because we believe that obstructions of this degree, taken together, increase flood risk. John’s concern is primarily with safe navigation where the problem is obvious.

While the EA could clear this they are very probably not obliged to do so, the responsibility is likely to rest with the riparian owner on each bank – but we hope that if the EA don’t do the work themselves they will use their powers to ensure that these trees are cleared as soon as possible.

Why do we need a flood scheme at all?

We have had five major floods since 2000 and climate change will make things worse (indeed there is evidence from Oxford University that it already has). Oxford residents, and the economic well-being of the City, will suffer badly if something is not done. While the scheme will cause disruption during its construction it is imperative that Oxford is protected.

But what about downstream, won’t they be worse off?

All the detailed computer modelling for the Scheme (and we have recently heard on the grapevine that a totally independent consultancy has confirmed this ) says that flooding will not be made worse downstream. We know that comparisons are made with the Jubilee River – this scheme is nothing like that. Indeed OFAS is actually increasing the capacity of the floodplain, which together with bunding and rerouting of flow will reduce flood risk to many hundreds of properties.

Is it a concrete channel?

No, it isn’t. What it is is a much more naturalistic 2-stage channel, used around the world for flood relief.

How will the environment be affected?

While there will, regrettably, be some environmental losses, we are pressing hard – collaborating with the Environment Agency, and with support from others, particularly the Freshwater Habitats Trust – for environmental enhancements as part of the scheme. While one cannot compare one environmental loss directly with another environmental gain we believe the positives will be considerable.

It’s so important that there is a plan now for the very long-term maintenance of the Scheme. In our experience over the last 10 years  “if maintenance can be neglected it probably will be”. There are some honourable exceptions and we certainly have we have no criticism whatever of the local EA maintenance team, who achieve a huge amount with very limited resources. Others do nothing or very little unless goaded and embarrassed into action. This Scheme, being “natural” will deteriorate quickly if not proactively maintained. The initial intent was to plan maintenance for 10 years: that is simply not good enough for such an expensive and important project. We have proposed that maintenance be planned for in perpetuity by setting up a responsible, funded, local body, maybe as a charitable trust (or similar).

thinks that Oxford could and should be protected by very different means – while they are short on specifics, their main idea seems to be that planting enough trees upstream in the Cotswolds would solve Oxford’s problems. It wouldn’t. Expert opinion at our 2015 Symposium of Natural Flood Management (NFM)  made that very clear. Even afforesting the whole of the Cotswolds (not that that would ever happen) would not do the job. Oxford is simply too far downstream for that. That’s not to say that NFM can’t work in smaller catchments, nor that it might not make a contribution.

The Environment Agency’s Oxford Flood Risk Management Strategy (OFRMS) suggests this may be needed one day if climate change makes things sufficiently bad. Involving as it would temporary flooding large areas of farmland and other land it is never likely to be easy to implement.

We met with the Environment Agency (EA) and Jeremy Biggs of the Freshwater Habitats Trust (FHT) today.

We talked about articulating an environmental vision for the Oxford Flood Alleviation Scheme (the Scheme) which brings together the various initiatives which are planned and how these will be managed and maintained. This included possible bodies/corporate structures that might be involved in overseeing maintenance in the long-term, to deliver both flood risk reduction and benefits for wildlife. We are working towards a preferred option for the future management arrangements.

FHT is hoping to facilitate community involvement in the conservation of freshwater habitats within the Scheme area – for example by employing someone to liaise with local people, including schools, so they can be involved in wildlife science in the floodplain. Part of the funding has been secured by a generous offer of funding from Thames Water, and FHT and EA will now approach other bodies together.

OFA is about to send letters asking local businesses to contribute funding to help close the small funding gap that remains for the Scheme. 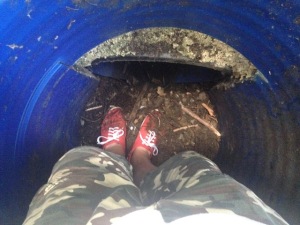 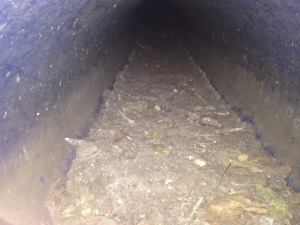 Debris along the drain

An alert resident has reported to us that a large drain on the path from the end of Duke Street to King George’s Field is partially blocked. Our intrepid Nick Hills has investigated and whilst he was able to remove sticks and twigs that were probably stuffed into the drain by children, there is still a considerable amount of debris that needs to be cleared from the connecting pipe. We think that the County Council installed this drain (to help with flood relief) and we’re asking them to look into it (pun intended).

We’re happy to receive reports of obstructions in drains, trees in waterways and so on. It can be difficult to know who is responsible – we can usually help with that and with reporting the problem. Details of where the problem is are obviously essential and photos are very useful. 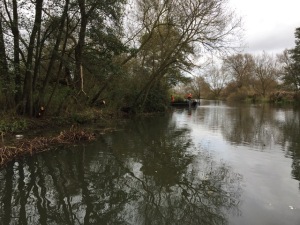 Working on nearby Hinksey Stream

Environment Agency contractors have been working on the Weirs Mill Stream and nearby this month. We helped identify the need for this maintenance (see 2015 APM report para 3). The work will  improve conveyance of water through this important part of the Oxford river network. It is above and beyond the usual annual maintenance programme and is being paid for using additional funds which the Environment Agency received from The Treasury following last winter’s flooding.

The main question: ‘How might we best organise things to keep the channel working well and make the best of all the benefits over the next 100 years?’ There was excellent discussion with the following conclusions:

There was a general agreement with the idea of coordinating management of OFAS, and that this could bring cost savings and enhanced benefits from the scheme.

It is currently unclear what form the coordinating body would take but it is clear that riparian owners will continue to own their land and will be responsible for managing that land. Their participation in the coordinating structure is therefore key.

More detail about exactly what the required maintenance will be, and how this splits across hard physical assets, the stream and the secondary channel is needed before a further discussion.

In the meantime it was agreed that work to consolidate the ecological vision for OFAS was needed. Conversations are already going on with various stakeholders about this and a draft set of ambitions exists. It was agreed that we should build on these.

It looks as if good progress is being made. We’re told the wooden posts will be removed, towards the end of the work. 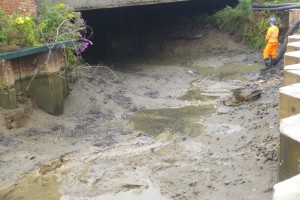 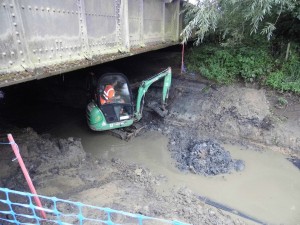 Munday’s bridge under the mainline railway at Kennington is an important route for flood water to leave the west Oxford flood plain. A lot of work was done to improve it in 2013 but the channel itself under the bridge was never properly cut and profiled and large wooden posts were left in situ in the channel. Work started yesterday to put these things right.

1. On the west, looking back upstream from the bridge 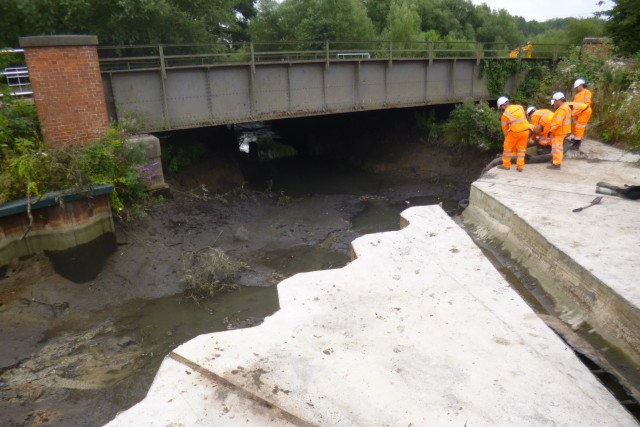 2. From about the same point, now looking downstream towards the bridge 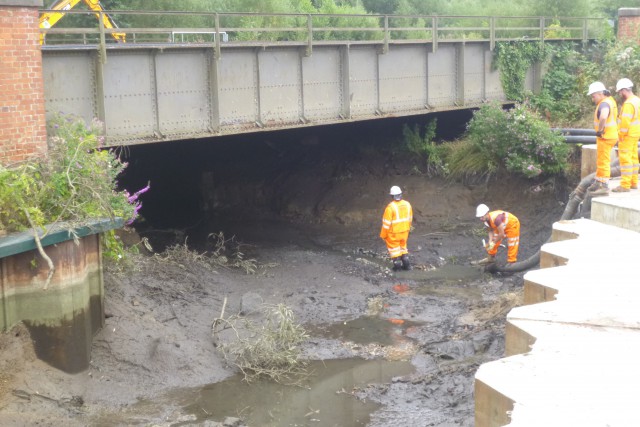 4. Looking back upstream under the bridge from the east

5. Same as last, but from further downstream 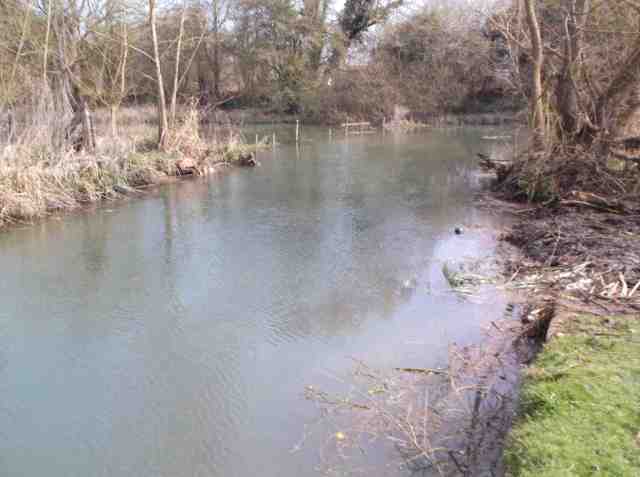 The Environment Agency have recently been clearing in the Hinksey Stream, this taken just south of South Hinksey. 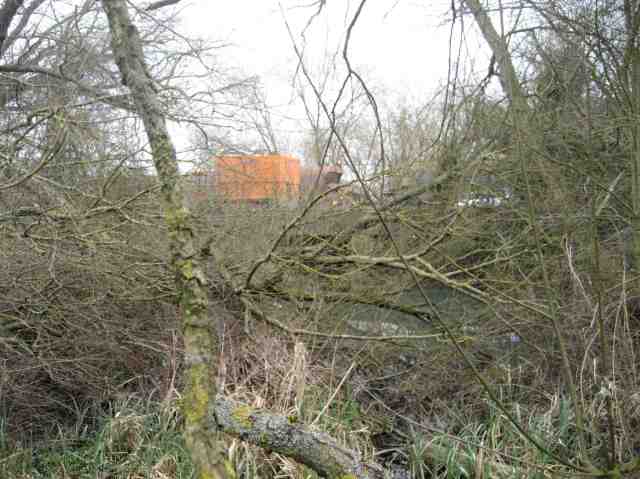 Railway line behind, concrete box culverts carrying Hinksey Stream under the railway can just be seen 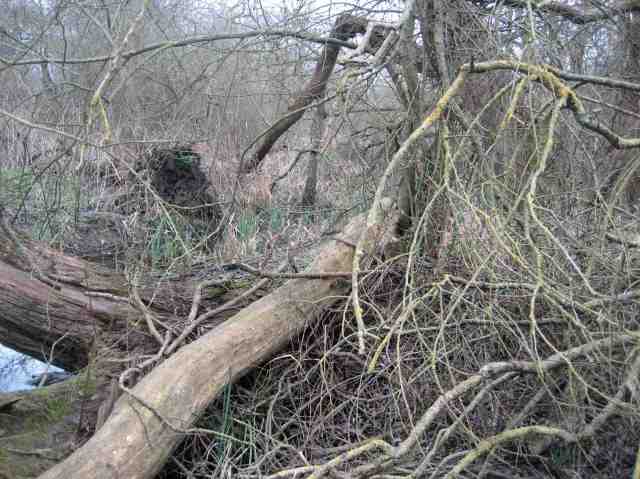 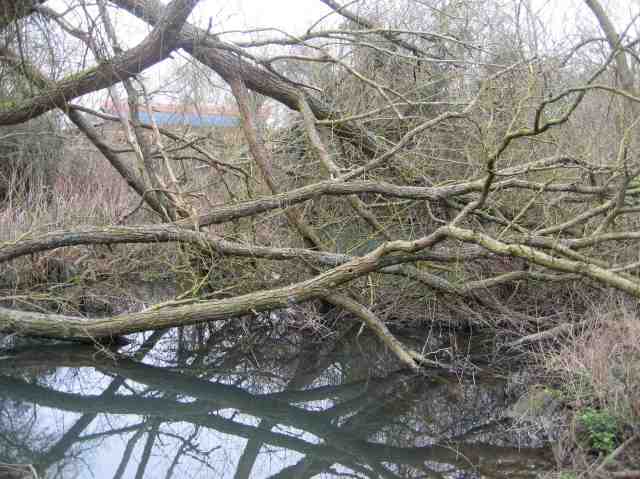 Four of us met this afternoon to inspect this important area. Hinksey Stream and Hinksey Drain are designated Main Rivers: the visit today was to the point, south of South Hinksey, at which the Stream goes under the mainline railway and the Drain diverges from it.

As mentioned on our Home Page we are determined that maintenance of the waterways is properly planned for and given high priority, so everything works as well as possible. We want to see riparian owners fulfilling their legal responsibilities to keep waterways clear. We have for years been agitating that this particular area receive attention as it is in an appallingly poor state.

Today’s meeting took this an important step further on. Present were Peter Collins, Environment Agency, Steve Smith, engineer from Oxford City, and Adrian Porter and Peter Rawcliffe from OFA. There was unanimous agreement that extensive clearance of this area is needed as soon as possible. Steve Smith will be checking on the ownership – once this is certain, Peter Collins will work with whoever it is (seems likely to be Oxford City or Network Rail) and the tenant farmer of the adjacent field, to start clearance asap (subject to bird nesting).

These photos can only give an idea of just how very badly looked after this vital area is. We thank Steve and Peter for taking this on and will be supporting them if any difficulties arise.