Our Annual Public Meeting on 19 November was well attended – we were delighted to welcome many members of the public, local councillors, representatives of all the local flood agencies, an Oxford University researcher and Andrew Smith, MP for Oxford East. Nicola Blackwood, MP for Oxford West and Abingdon, and Rodney Rose, Deputy Leader of Oxfordshire County Council, sent their apologies.

Adrian Porter began the evening by setting out our three key current objectives:

He went on to give an overview of the past year including our recent boat trip, with the Environment Agency, which identified necessary maintenance on Weirs Mill Stream: this work is being planned and funding being sought. John Mastroddi provided detail on the clearance under Munday’s bridge, which completes the project begun in 2013. Impending planning applications at Seacourt P&R and Oxford Four Pillars Hotel, both firmly in the floodplain, are on our radar.

Nick Hills, our Treasurer, told us that we had £346 in the bank, enough for several years at the present rate of spending! Nevertheless, being the good treasurer he is, he asked people to leave any donations as they left: this raised a very generous £110. Nick set out some of the things we’d been pleased to see in the year: among those not referred to in more detail later on were the permanent pipe under the Botley Road to allow pumping across the road without disruption to traffic (County and City Councils), Waitrose’s use of SUDS at their new shop and the successful public events for OFAS during the summer.

He explained how we support OFAS in principle and are contributing to the process along with the other partners – but always reserving the right to be a ‘critical friend’.

The first of our guest speakers, Joanna Grew from Network Rail, gave an account of their proposed Hinksey Flood Alleviation Scheme: this includes the clearing of culverts at Coldharbour (for which we have been pushing for some time), track raising and installation of new culverts. More detail can be seen in Joanna’s presentation downloadable here. You can download a leaflet about the scheme here.

James Playfair explained the progress of Thames Water’s ongoing sewer survey across Oxford, the Oxford Catchment Study. This is about to enter its second year: already some issues have been resolved including significant improvements to the pumps at Littlemore Pumping Station. The presentation can be downloaded here.

Last but not least Emma Formoy from the Environment Agency gave the meeting an up-to-date account of the Oxford FAS; Emma mentioned the possible wider benefits of the scheme, including for wildlife, and the crucial importance of rigorous modelling. More detail in the presentation downloadable here: this includes dates of the next round of Public Events in January 2016 when a consultation on the route options for the scheme will begin. These can be also seen in the Oxford FAS Newsletter – November 2015, perhaps more easily. In parallel with these events, people will be able to view these proposed options and partake in the consultation online.

Apart from these individual achievements and plans, what is remarkable, and heartening, is the considerable cooperation, for example sharing of modelling data, between these three agencies – i.e. they talk to each other! As one of us commented later, we have come a very long way since 2007. We are grateful to our guests for coming to talk and for all the work their organisations are doing. The sum (assuming they all reach fruition) will give Oxford a better, and more secure and sustainable, future.

Nick Hills presented Steve Smith, Engineer with Oxford City Council, with our Flood Star award for this year. This is in recognition and thanks for Steve’s sterling work on many flood schemes and smaller works over the years, as well as co-ordinating the Oxford Area Flood Partnership.

Peter Rawcliffe spoke about OFA’s suggestion for maintaining Oxford FAS: as this is to be largely a ‘natural’ channel it will be subject to inevitable deterioration – so providing both a problem and an opportunity. OFA proposes that a trust be established, in perpetuity, to manage for both flood alleviation and wildlife. Trustees could be drawn from the several stakeholders – landowners, local authorities, Environment Agency, academics and wildlife bodies – to name just a few. We believe this is a practical way to make the most of what the scheme offers Oxford and its residents and visitors. This 7km channel will be ever more essential to Oxford if climate change develops as predicted. Each km may cost £18 million to build. We need to treasure it: in our view a local trust with local accountability, and autonomy to manage as it sees fit, fits the bill.

Simon Collings discussed modelling: as mentioned above this is absolutely vital to developing the case for OFAS – both to be as sure as humanly possible that it will work and equally importantly that no one downstream will be disadvantaged. We recently attended a meeting at the School of Geography, Oxford University: Simon explained some of the potential pitfalls of modelling that we had learned of there, and suggested that community review of the OFAS modelling (assisted by expert modellers) be included in the scrutiny process. This in addition to review by academic modeller(s) which is already under discussion for the scheme and which we strongly support.

We thank those who attended for their support and we thank our visiting speakers for helping to make the meeting a success. Our thanks too to the West Oxford Democrats Club for generously allowing us to use their hall once again. 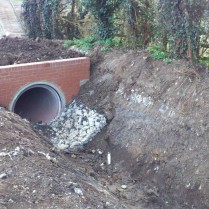 Work is well advanced in rehabilitating a ditch on the west edge of the Ferry Hinksey trading estate, at the east end of Willow Walk. We pointed out some time ago that this ditch had deteriorated to the extent of disappearing in places, and being completely cut off in others. Oxford City Council, led by engineer Steve Smith, designed and obtained government funding for the work. About 90% is now complete, but finishing is delayed by finding two high voltage cables that are not shown on any utility company records. Once this is sorted out the work will be completed. Well done to all concerned.